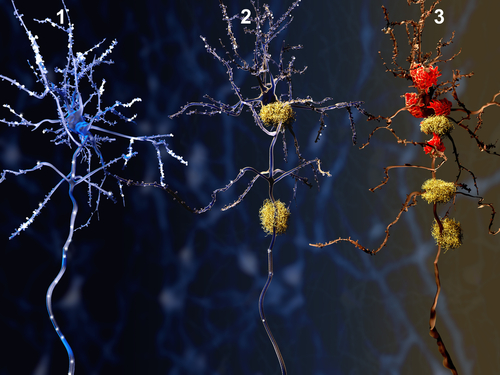 A protein involved in ovarian cancer, known as OCIAD1, contributes to the neurodegeneration seen in Alzheimer’s disease, and may be a more fitting treatment target than beta-amyloid, a protein long linked to this disease, a study suggests.

Specifically, elevated levels of the OCIAD1 protein affect the workings of a small organelle known as mitochondria — the cells’ energy source — and hamper nerve cell communication.

The study, “OCIAD1 contributes to neurodegeneration in Alzheimer’s disease by inducing mitochondria dysfunction, neuronal vulnerability and synaptic damages,” was published in the journal EBioMedicine.

Hallmarks of Alzheimer’s disease include the accumulation of amyloid plaques (aggregates of the beta-amyloid protein) and neurofibrillary tangles (abnormal buildup of tau protein) in the brain together with progressive neurodegeneration.

But it’s not clear how beta-amyloid plaques or tau tangles are linked to neurodegeneration, and why some areas of the brain are more prone to the loss of neurons and synapses than others. (Synapses are the junction between two nerve cells that allows them to communicate.)

In fact, the work of several studies suggest that brain areas with higher densities of amyloid plaque buildup do not always match those of tau accumulation or neurodegeneration during disease progression.

Likewise, therapies targeting beta-amyloid or tau aggregates have had positive responses in pre-clinical animal models, but consistently show poor results in human clinical trials. This failure suggests “other mechanisms may contribute to the brain vulnerability and progressive neurodegeneration in [Alzheimer’s disease].”

“Many Alzheimer’s researchers have focused on amyloid beta alone, or connections between amyloid beta and another protein, tau,” Stephen T.C. Wong, PhD, the study’s lead author and an associate director of Bioinformatics and Biostatistics Cores at Houston Methodist Cancer Center, said in a press release.

“Our finding suggests another known protein may be coming into play here,” Wong said, adding the work may lead to new treatments and disease biomarkers.

Researchers at the Ting Tsung and Wei Fong Chao Center for BRAIN of Houston Methodist investigated what other proteins could be involved Alzheimer’s progression. As such, it addressed “a fundamental question of Alzheimer’s disease — how, or if, amyloid beta accumulation … is involved in progressive neurodegeneration,” Wong said.

To analyze factors associated with neurodegeneration at early stages of Alzheimer’s, researchers analyzed the protein profile of isolated synapses from the brain of an Alzheimer’s mouse model (at 3 months and at 6-8 months old), as well as the genetic profile of degeneration-prone brain areas from deceased patients with sporadic Alzheimer’s disease.

A total of 59 proteins were associated with disease development in Alzheimer’s mice, all of whom showed a mild synaptic loss in the cerebral cortex — a brain area that controls several functions including movement, speech and memory.

Among the human brain samples, differences in the levels of 501 genes were observed between vulnerable brain regions involved in learning and memory — the entorhinal cortex and hippocampus — and non-vulnerable (primary visual cortex) areas.

By crossing information from the two datasets, the researchers found three proteins associated with Alzheimer’s progression: ARPC4, NDUFA11 and the ovary orientated protein (OCIAD1). Since ARPC4 has not been linked to Alzheimer’s or neurodegeneration, and low levels of NDUFA11 could be a possible consequence of cellular changes in the Alzheimer’s mouse model, researchers focused on OCIAD1.

They found that OCIAD1 was highly abundant in vulnerable areas of the brain in healthy individuals, and in patients with Alzheimer’s. Importantly, in the context of Alzheimer’s disease, higher-than-usual levels of OCIAD1 in the hippocampus correlated with disease severity, “supporting that OCIAD1 level may be associated with the brain vulnerability in AD.”

To further examine the possible connection between OCIAD1 and Alzheimer’s, the team used computational analysis of protein-protein interactions, and found a total of 20 regulatory factors of OCIAD1. Among these, the nine factors that promote OCIAD1 expression were elevated in Alzheimer’s, while the eight factors known to lower the expression of this protein were reduced.

The team further found that OCIAD1 contributed toward neuronal loss and synaptic degeneration through mitochondrial dysfunction, a common feature involved in Alzheimer’s. Around 28% of OCIAD1’s molecular partners were found to be relevant to the proper workings of mitochondria, while 43.1% were linked to cell death pathways.

Importantly, the researchers found that OCIAD1 interacted with the BCL2 protein, lowering its levels and causing the activation of cell death (apoptosis), contributing to neuronal loss in this way. (BCL2 is a cell survival protein known for its role in preventing apoptosis.)

“We applied a system biology strategy to see if we could find a different mechanism of neurodegeneration in Alzheimer’s disease,” said Xuping Li, PhD, a study author.  “We identified OCIAD1 as a new neurodegeneration-relevant factor, predicted its function, and demonstrated it mediates the long-term impact of amyloid beta on cells and synaptic damages by impairing mitochondria function.”

They concluded their study by noting: “Our findings raised a possibility that OCIAD1 may mediate the pathological interactions at early disease stage among amyloid β [beta], p-tau pathology, and neurodegeneration.”

Its significance “is that it reveals a new role of OCIAD1 in neurodegeneration and helps understand the … relationship between brain vulnerability” and the buildup of amyloid protein deposits in the brain of people with Alzheimer’s.